The second edition of the festival will be held on 7-8 Dec 2012 in Gdansk!

SpaceFest! is organized by Nasiono Association in cooperation with Laznia Centre for Contemporary Arts, Batycki Factory and with the support of the City of Gdansk. 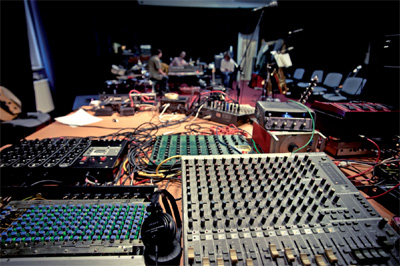 Pure Phase Ensemble is an international shoegaze instrumental collective created especially for the SpaceFest! festiwal.
9 musicians from Poland and the UK will take part in a workshop held in Laznia CCA in the beginning of December 2012. Together they will compose the music material which will be presented to the audience during the festival. The musicians will create 7 songs based on a certain key tones extracted from Pure Phase Tones for DJ’s by Spiritualized. The songs will be recorded live and then released on a CD.
Raymond Dickaty, a British saxophonist improviser, in 1997-2002 a member of Spiritualized, cooperating among the others with Radiohead, Stereolab, Lush, Dr. John – will create the programme of the workshops together with Chris Olley (Six By Seven) and Steve Hewitt (ex Placebo).